I purchased a high powered LED light fixture (Solar Extreme 500) from California Lightworks, a US company. It's a full spectrum LED light that covers 16 square feet. I was tempted to buy cheaper Amazon LED lights, but I wanted to purchase lights from company that had a 3-year guarantee.  I bought a grow tent from Spider Farmer that is large enough to house 5 to 6 plants and a fan and duct tubing for ventilation. 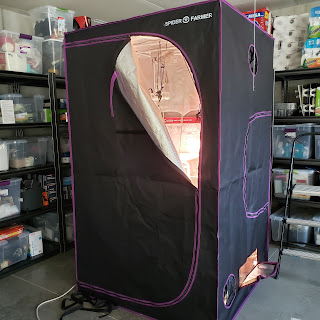 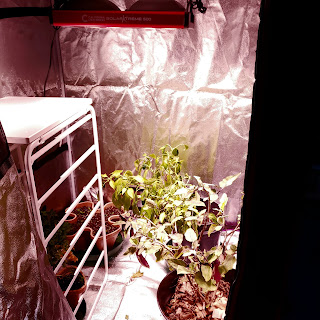 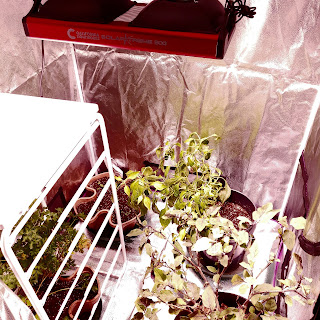 I placed my summer asian eggplant and pepper plants in the tent to see if they would revive. They did well for about a month, then they began to die back from an aphid infestation. I gave up on trying to save them and threw them out. I also tried growing basil from seed but they struggled to thrive in the tent under the grow lights.
After removing the diseased plants, I placed my tomato plants into the tent. To prevent insects from attacking the new leaf growth, I dusted the plants with dichotomous earth. It's not recommended to use dichotomous on outdoor plants because it is an indiscriminate killer and can hurt bees.
The cuttings grew in their small ceramic pots for a month and then I replanted them into medium sized planters in a homemade soil mix made of peat moss with perlite and some mushroom compost and slow release fertilizer. I watered the plants with reverse osmosis water because my home uses a water softener which adds salt ions to the water.
The tomato plants thrived in their new pots and under the grow lights. Flowers began to appear about two months after the initial planting.  By the third month, fruit is beginning to set and by the 4th month, the fruit is ripening on the vine. 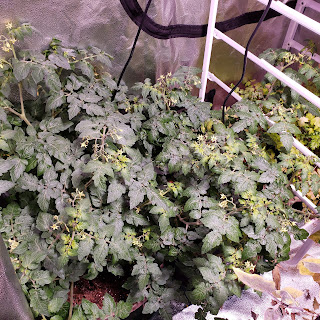 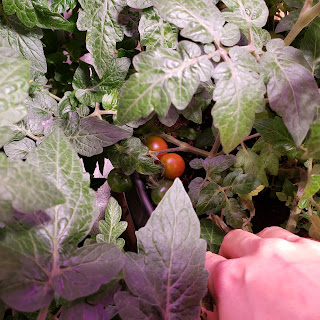 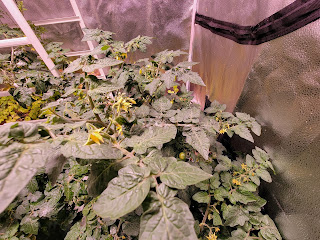 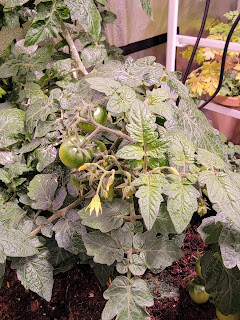 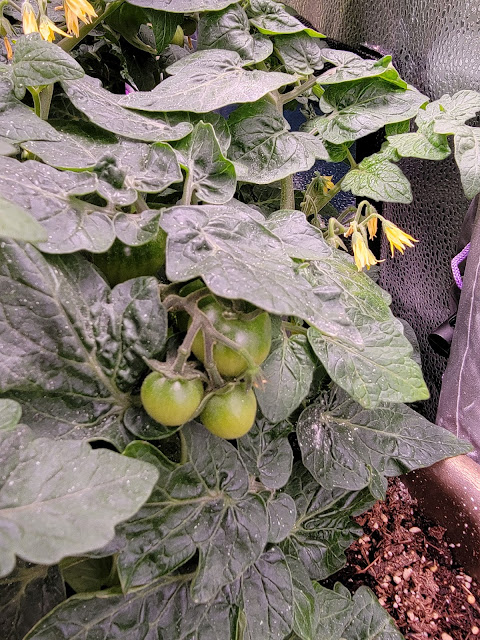 The Little Tomato Plant that Could

One of the three tomato plants had a very rough start. This was the stem I tried rooting in water only and it rotted during the first two weeks. Instead of throwing out, I planted the stem in soil. A few weeks later, the stem turned yellow and soft. I looked closer and found live roots growing from the rotted stem. The plant today is smaller than the other two healthier plants and leans because is only has a root at its base instead of a main stem. I use twine to hold up the heavy fruiting vines.

Please go to my post, Growing New Tomato Hybrid, Veranda Red, to read about the tomato plant variety discussed in this article.
Please read about growing Tomato Plants Grown From Stem Cuttings.
I use a natural pesticide, Neem oil, to control the Japanese beetles in my garden. Please read about my DIY Neem oil Spray. 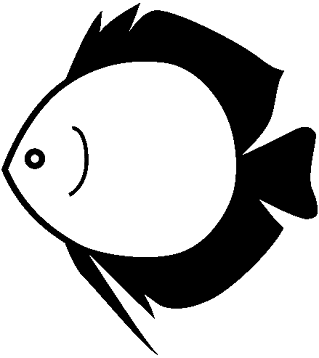